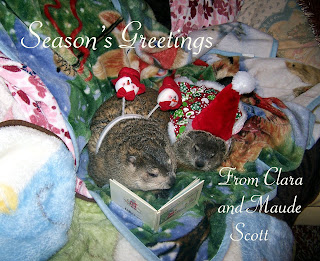 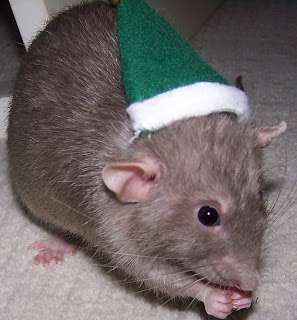 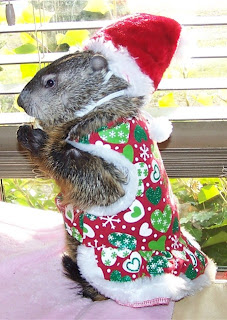 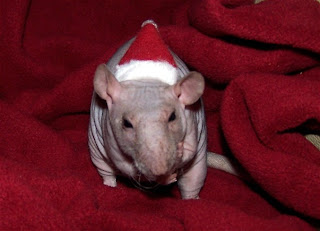 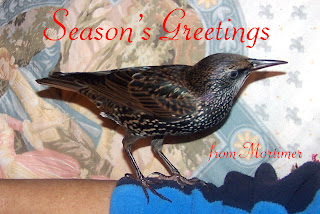 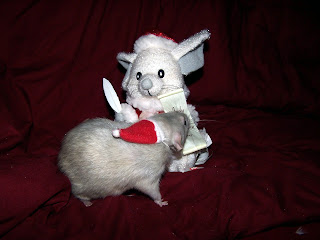 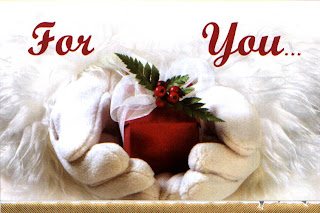 December is the time we seek out the perfect gifts,
Ones we’re sure will bring a smile to each person on our list.
And we tuck them all away in some dark secret locale,
Giving ne’er the slightest hint as we friends gaily regale
With the parties, shopping trips and tree trimming celebrations
That all whisk us through these days of harmonious relations...
Waiting for one special morn when at last all is revealed,
And the joy of bright surprises we can no longer conceal.

When the happiness we’ve longed to share at last reaches fruition
As recipients’ warm “Thanks!” reward each correct intuition.
And we know we have succeeded in our goal this time around
Of assuring in the hearts of those we love that joy abounds.
Still such tangible displays, so familiar and such fun
Are but rituals designed to point up a greater one –
A gift, that is, of course, one most meaningful and true,

That is given all of us to enjoy the whole year through.
It’s a gift crafted from sharing all we have and all we are
With the ones who’ve touched our lives, whether they’re found near or far.
It’s the gift of reaching out in the spirit of the season
Now commemorated here, and which brings us to the reason
That this card is being sent as a reminder and wish
That the “present” given us  -- each day -- might prove your favorite gift.
Happy Holidays

Mortimer, Maude and a Much Belated Magazine

Yes, it's been ages since my last blog entry, but this certainly isn't for lack of subject matter.  In fact, the explanation instead lies in so much having happened, and as a result, so little time to report all of the news.  In any case, I thought it about time I show you a couple of these (utterly joyful) time consumers, so you get a clearer idea why I've been so absorbed by them.

First, I'd like to introduce Maude, the baby groundhog we brought home on Mother's Day to become Clara's little sister (a situation which Clara has yet to decide is a blessing or a curse!).  She was just over 8 weeks old when this photo was taken (she was born on April 9th), and weighed about 1 lb.  She's also indescribably cute -- as you can see... 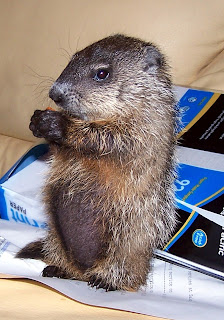 You'll be able to read more about her in the upcoming issue of The Rodent Reader Quarterly, which subscribers will attest, is hopelessly behind schedule (though it's finally expected to mail out within the next couple weeks).  And, yes, Maude (or, rather, my fixation with her, marveling at the cuteness of her every expression, and a preoccupation with capturing every aspect of her growth) is in part to blame. 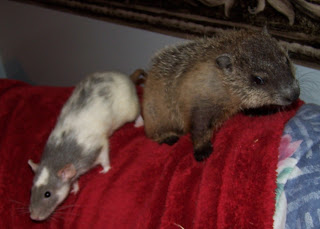 There's also another new baby, however, who's completely captured my heart (and attention) -- a baby European Starling now known as Mortimer -- a creature who literally fell into our care the very day after we first met Maude.  He was approximately five days old at the time, and had apparently been lying on the unfinished floor on which he'd landed (after falling from a nest in eaves at least a dozen feet above) for so long he was very cold and seemed barely alive.  As we worked to get him warm and began feeding him (every 20-30 minutes), we felt hopeful, but by no means certain he would survive. 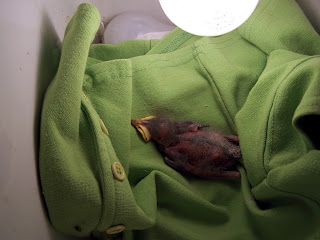 But, survive he did.  And, with each passing day hope of his reaching healthy, happy Starling adulthood rose.  Now, at nearly 8 weeks old, he's well on his way -- not to mention making friends with Maude and the rest of the household... 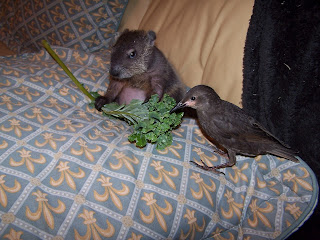 And, though he's an absolute joy just the way he is, I have to admit I can't wait until sometime around October or so when he begins to talk (yes, in human speech)!  There's nothing like having a Starling land on your shoulder and greet you with, "Hi, Love" or tell you that you're "wondersilly."

But, these, indeed, "wondersilly" little ones aren't the only preoccupatios that have led me so far astray from my TRRQ deadline.  I've also completed a couple projects for my musician friends, Brian Fitzpatrick and Michael McDermott over the past couple months -- among these writing a new bio for the latter (which you can read here) .  And, I've offered various expressions of my "insane rat love" in the form of photos, poetry, etc. to other publications.   In other words, there's already plenty of material for the next blog entry -- which, like the rest of the projects still waiting for completion, will never appear unless I finally post this one!

So, until next time, thanks for checking in -- and for your patience!

I just wanted to let everyone know that after a hard drive crash in January, which wreaked havoc on the TRRQ completion schedule, at last the new issue is at the printing company and will mail out later this week!

Thanks to all subscribers for your patience.

And, if you're not among this group, but love pet rats, groundhogs and other misunderstood species - plus have an affinity for literature and art, it's hoped you'll check out the TRRQ page of artistinsane.com (http://artistinsane.com/rodent-reader), and subscribe today.